The nose occupies the central part of the face,this is why it has a crucial role in the aesthetic of the face. Shape or size related imperfections can be corrected by rhinoplasty.

Nose surgery is one of the most impactful procedures for patients in terms of appearance and confidence, which explains its popularity. Rhinoplasty can refine the bridge, the tip or the entire nose, it can also reduce the size of overly large nostrils. Many people want to undergo this surgery to correct inherited imperfections, deformations caused by injuries and removed a nasal hump.

The incision is usually made inside the nostrils to access cartilages and bones of the nose without leaving traces of a surgical procedure. These elements are reshaped by Dr.Balti depending on the patients wishes. The cosmetic surgery of the nose is performed under general anesthesia and is 1 to 2 hours long. You will wake up from surgery with a cast on your nose (which will be removed after 1 week) and gauze in your nostrils to to absorb bleedings that are relatively frequent after surgery. The local anesthetic used on top of general anesthesia has a prolonged effect so you won’t experience any pain when you wake up. Standard painkillers are usually enough to control postoperative discomfort.

The swelling of the nose will start to decrease after 2 to 3 days. Bruising are also frequent, they appear around the nose and under the eyes. For the swelling to go down entirely, patients have to wait 6 months on average, after which the definitive result can be seen.

The ideal patient is a healthy individual who doesn’t smoke and can stop taking blood thinners during 2 weeks before surgery. This individual must present with a notable imperfection of the nose justifying a surgical procedure.

Any specific precautions after surgery ?

Of course, avoid all contact with the nose during at least 2 months after your rhinoplasty in Tunisia. Also avoid physically demanding activities during 2 to 3 weeks because they can aggravate the swelling. Sun and heat exposure carry a risk of impaired wound healing, which is why they must be avoided as much as possible during 1 month. 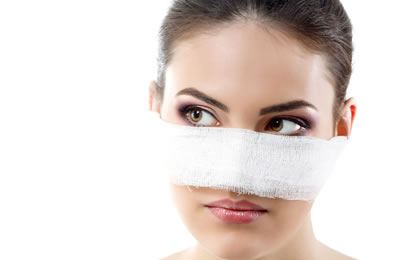 GET IN TOUCH WITH DR BALTI